After one wonderful month in Mayotte we left to Madagascar yesterday.
Mayotte - a vulcanic island governed by france - is really unique. To pay in Euro and speak french in this remote place of the world is a change at best.
French delicatesses like good Cheese are available for reasonable prices.
We had wonderful hikes on the island peaks - one of them is a spectacular cone - Mont Chungi, with a fantastic few. On the way up we saw Makis who are sweet monkey like creatures, banana, orange and papaya plantations, crater lakes and a stunning vegetation.
We found a wonderful rock climbing spot perfectly maintained with glued in bolts and super dive sites. Now a new adventure is waiting for us. When we sailed in to Nosy Be in Madagascar many little gaff rigged fisherboats sailed by - an incredible view.

We have now spent one month in Madagascar and so far it has been packed full of special unforgettable experiences.  The landscape and activities to be had are so diverse between the vertical cliffs with incredible rock climbing in Nosy Hara to the lush jungle in Nosy Komba where we spent some time with the mad scientist looking makis and other local creatures to the Maldivian look of Nosy Iranja further South.  The highlights have been the humpback whale and dolphin encounters, the makis and the culture and charm of the Hellville market place where we saw shoppers pack live chicken and crabs into their shopping bags. We already know that we would miss Madagascar when we have to leave mid of October since it is surely one of the highlights of our trip and there is so much more left to explore.

1200 Miles and 14 days nonstop on the Ocean. Now we arrived in Richards Bay, South Africa.

After a save passage from Madagascar with Siggi and Eveline two weeks ago, we arrived well in Richardsbay. The passage was a food and music highlight thanks to Siggi and Eveline, who played the Wild One song on the guitar even after 10 days of changing winds and little sleep. The weather could have been worse considering the stories of other sailors who arrived after us with quite some damage. Super surfing, monkeys on the boat and a civilisation shock in the shopping wall were the highlights after our arrival.
We just returned from a 2 week Safari through the Krüger park with my parents who came for a visit to South Africa. On the way back we stopped at Waterval Boven - South Africas top rockclimbing spot.
Tracy is cheating by taking the plane westwards. The remaining crew, my parents, Natasa and me will leave to Durban tommorow.

Maybe we can make it in one go to Capetown - I am just getting the weather. We passed East London that night and it is only 70 miles to Port Elizabeth. The most dangerous leg because of the long sailing distance is over. We have the wind from the back or the side with 10 to 15kn - the waves are not too bad but from all directions and the slamming of the main sounds horrible. Thats why we go only with the Genua now - but still 8 knots with 4 knots current pushing us....Cool;-)

I wished to motor round the cape - here we go - the whole night under motor - the ocean like a mirror and just past Cape Agulhas the southernmost point of South Africa! And during the day the whole time wind from the back with Gennaker!
The most amazing flureszising Dolphins appeared in the night. We have seen it all but here they were much brighter due to the plancton. You could see the finest details on them. Yesterday my parents saw their first humpback whale as well only 20m off the boat.

We rounded Cape of good Hope safely with very pleasant wind and even used the Spinnaker and Gennaker. In fact we seldom had such pleasant sailing in the Indian Ocean.
Yesterday my parents left home after helping me a lot to organize new boat equipement for more than 4000€. Wild One had birthday and became a new Spinnaker, new Dynema Ropes, stanchion wires, a new engine for the dive compressor, mountainbike, various replacements etc, etc.
I became adopted by Barry and Kim - friends we met at the Seychelles who live in Cape Town. Their hospitallity is outstanding. Never experianced something like that. Barry took me out in his Helicopter, we made super hikes and scrambles onto the tablemountain and in the sourounding area, went mountainbiking, kajaking, stand up paddeling, climbing in the ceddarberg mountains and crayfishing. After a tablemountainclimb yesterday we went out with Wild One and watched the inshore regatta of the volvo ocean race. Next week Wild One will race her first regatta! 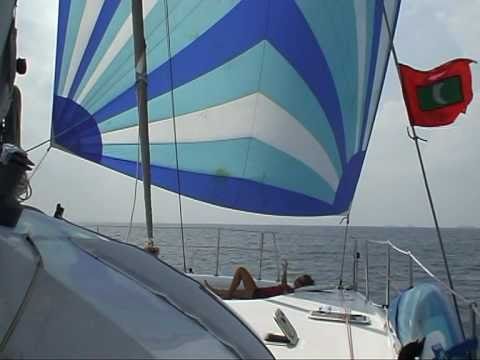